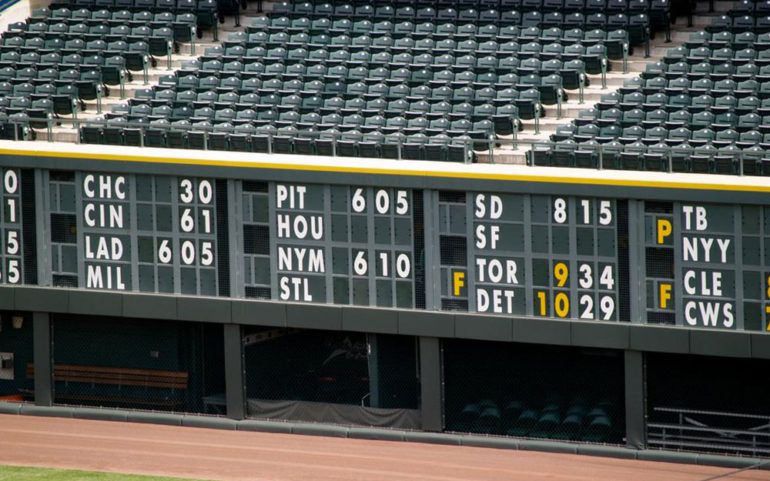 Scoreboards have had a long life and are probably older than most of us who relish the modern-day game. The scoreboards have evolved in a significant manner over the years having moved hand-in-hand with the growing technologies. In the new age, we have been blessed with electronic scoreboards shooting fireworks and animations to celebrate a home run or a victory. There were times when the scoreboards were operated by ‘scoreboard keepers’ with the use of chalks and hanging boards marked with numbers.

Here’s a look at the early scoreboards and the adoption of the electronic scoreboard:

George A. Baird developed an electric baseball scoreboard in 1908, in Chicago. This scoreboard recorded balls, strikes, and outs in electric format, while everything else was still added manually. This was a substantial invention, with great prowess, but it did not prove good enough to be picked up as quickly people thought it would be. It was picked up and tested by only two major league clubs in Boston. The manual scoreboards added more impetus to their profile, over two decades, with extended information about players, lineups, pitcher’s numbers and inning scores.

Gametrackers were an extended innovation of the electric scoreboard, as that did not pick up at the stadiums. The newspapers houses adopted the electric boards to put up the score and simple graphics from the game. This news was telegraphed to the gametracker operators from the stadium. Thousands of people gathered outside the newspaper’s building to keep up with the gametracker and get instant news on the game.

The Yankee Stadium, built in 1923, featured a manual scoreboard for a span of 27 years. The scoreboard was placed in a spot that offered visibility to the fans sitting in all parts of the stadium. In 1950, Yankees unveiled an electronic scoreboard; they claimed this scoreboard to be “the most efficient scoreboard ever built and, in general, a big stride forward.” It featured a non-glare enamel covering and was operated by two operators as opposed to five on the earlier ones.