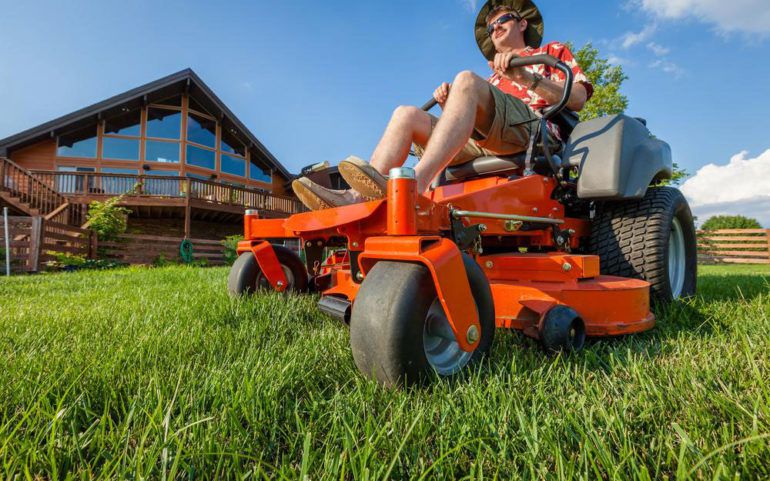 Zero turn mowers are basically riding lawn mowers with effective zero turning radius. The first commercially-available zero turn mower was invented by Warrensburg in 1949. It had three wheels, one in front and two in the rear, and was called the Ride King. The front wheel was used as drive wheel, which turned by 360 degrees. Currently, more than 30 companies manufacture zero turn mowers. They have varying engine power options, mowing deck options and accessories. The latest models have four wheels and some models include a fifth wheel mounted in the center.

Working of zero turn mower
There are four wheels in the newly designed models of the mower. There are two small swiveling tires in the front and two large drive tires in the back. The two back large drive tires operate in such a way that they rotate independently on driver’s input and in opposite directions. The mower can turn in the circle of any radius, it can pivot midway (Z-turn) between the wheels. If one of the tires is stationary, the other drive wheel can pivot around the stationary wheel. By rotating the wheels in reverse, the direction of travel can be reversed.

Z-turn mowers have two throttles to control the rotational speed and direction instead of steering. Two levers protrude on either side of the driver and are used to control the speed of tires.
To move forward, both levers are pushed in forward direction simultaneously with the same force.
For backward movement, levers are simultaneously pushed back in the backward direction.
For a gentle turn, one lever is pushed more than the other.
For creating zero radius turn, one lever is pushed forward and the other backward.

Operational functions of zero turn mower
Zero turn mowers are perfectly designed to cut around obstacles, tight spaces and through gates. This can be done without leaving any grass uncut. Maximum lever movement ensures rapid turning of the wheel. With better knowledge of lever movements, one can achieve a straight path, curved path or can reverse the direction. Most of the mowers today are equipped with a smart speed control system. It gives greater control of speed and maneuverability for pulling attachments and cutting grass.

Two or three-bucket designed system allows the collection of grass clippings.
Instead of discharging grass from the sides, clipping can be mulched back into the lawn with the help of mulching kit.
By adding a hitch to the back of mower, one can use a variety of attachments such as plug aerator, dump cart, lawn dethatcher, spreader, or sprayer.
For clearing snow or debris, snow blower, snow blades or brush are used that can be easily mounted in the front.