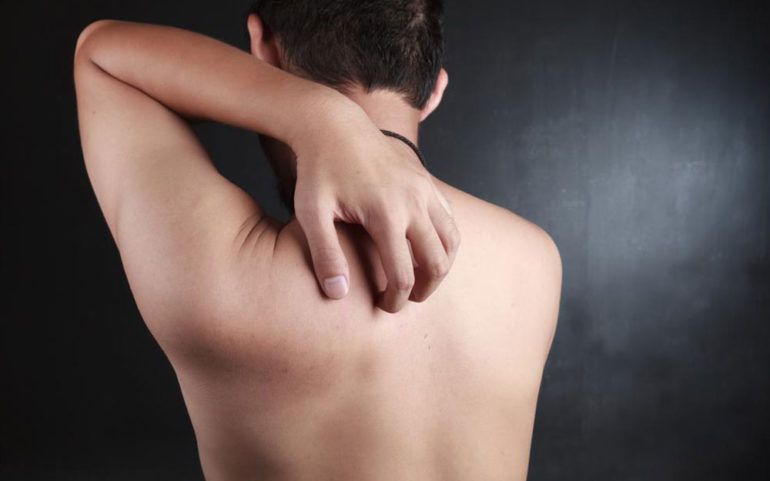 Skin rashes can occur at any place in the body due to a variety of reasons which include infections, issues with the immune system, allergens, heat and certain medications. One of the most common skin disorders which pave the way for skin rashes is atopic dermatitis, commonly referred to as eczema.

How to identify skin rashes?
Looking at the rash pictures, you will be able to understand how the symptoms look like. It is a chronic condition which leaves the skin itchy and red. Though skin rashes can occur on any part of the body, it mostly appears as patches on the upper body, limbs, feet, ankles and neck. It generally flares up from time to time and then subsides temporarily. Here are some common skin rashes:

Christmas tree rash: Also referred as to as pityriasis rosea, Christmas tree rash is an itchy and scaly rash which generally appears as a single patch on the abdomen, chest, and back. The rash may spread to other parts slowly and form a pattern like Christmas tree, which you can easily make out from the pictures of skin rashes.

Contact dermatitis: This is a type of rash which is caused by allergic reaction to different substances. These include cleaning products, industrial wastes, and some chemicals among others. These irritants generally cause irritation on the skin of any individual who’s exposed to them, but some people have sensitive skin and they get easily affected. It produces itchy rashes and bumps and may also cause blisters at some time.

Drug rash: This kind of rash occurs as a reaction to certain drugs or as its side effect. You may suffer from marks that look like the pictures of skin rashes, especially after taking some diuretics or anti-biotic. Also, some drugs are more prone to causing skin rashes when the person is exposed to direct sunlight. It normally begins within the first week of taking the medication and then the rash starts to spread and cover extensive areas of the body. If the affected person stops taking the medicine, the condition would subside within a few days.

Heat rash: This rash occurs when sweat faces some obstruction while flowing in hot and humid weather. Prickly heat is also a type of heat rash which appears as clusters of red and small bumps leading to pricking and stinging sensation. On the other hand, miliaria crystalline appears as liquid-filled bumps which normally produce no other symptoms.

How to get rid of skin rashes?
People with conditions similar to pictures of skin rash should avoid using harsh soaps, detergents or any other irritants. There are topical creams and antibiotic ointments available, which can reduce the flare-ups. It is important to consult an expert as there are different types of skin rashes, and each of them requires a different treatment. Some of them, though not severe, would still require thorough treatment while others tend to subside on their own. Skin rashes can also be prevented by wearing light cotton clothes, avoiding contact with allergens and avoiding sun exposure.