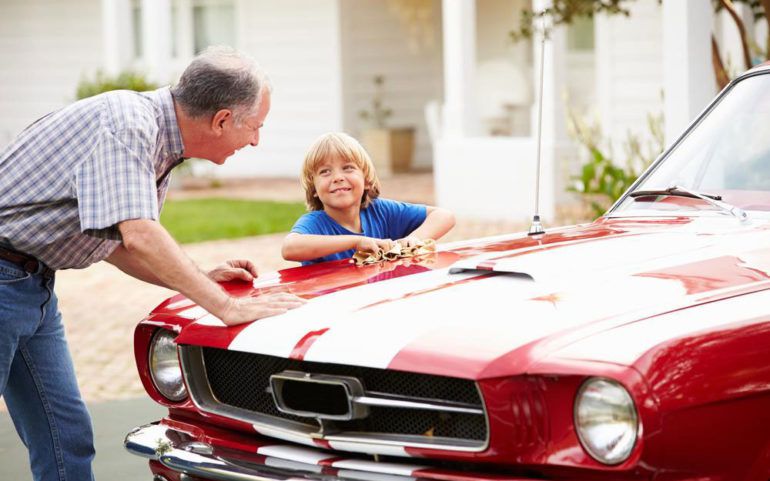 2018 Mustang GT feels very much like the 1965 Mustang which became a super hit among car lovers. This car still offers a V-8 engine with a rear-wheel drive, manual transmission, and charming two doors.

Under the hood, the car has a 0.8 mm larger bore, which is a result of a switch from cylinder liners to spray coating. This raises the displacement from 4970 cubic centimeters to 5030 4970 cubic centimeters. The power of 2018 Mustang GT has gone from 420 to 460 horsepower and torque has increased to 420 pound-feet from 400.

Modern suspensions
Mustang GT now comes with a Magnetorheological suspension system which uses metallic particles and electromagnetic coil to adjust the suspension stiffness according to the road. The driver has the choice of selecting the stiffness based on the selection of different modes, normal, sport, and track. This system can also make real-time damping adjustments according to the vehicle speed and driver inputs to change the settings on the go. This new suspension system makes Mustang a more versatile car.

New exhaust system
2018 Mustang GT has a brand new active exhaust system. This system makes it an extremely flexible car which can be handled well on a daily basis. The factory exhaust system in the past was the first thing that the car owners changed in order to achieve the roar of the car. But switching exhausts usually led to awkwardness in everyday use and a lot of complaints from the neighbors.

So, the company has now introduced an active exhaust system that uses electronically controlled valves to help the owners get the roar on the highway and stay quiet in their neighborhood. These valves help the drivers achieve four stages of car sound, which goes from a hushed whisper to a loud roar.

More power
2018 Mustang GT now comes with a V-8 engine that makes 460 horsepower and gives out a 420 feet-pound torque. These numbers have increased in comparison to the 2017 model. The best part of this change is that the engine delivers more power while also delivering fuel efficiency. In order to achieve this feat, Ford refreshed few of the key internal parts like crankshaft, cylinder heads, and camshafts. The company also removed the cylinder bores to achieve a slightly improved displacement of the engine.

Digital dashboard
One of the most noticeable changes in the 2018 Mustang GT is the 12-inch LCD instrument cluster. The dashboard is now digital and with this, the company has ditched the analog gauges. Now the driver can receive data, based on the situation. The company claims that new digital dashboard uses more than one million lines of code to provide its various functions.